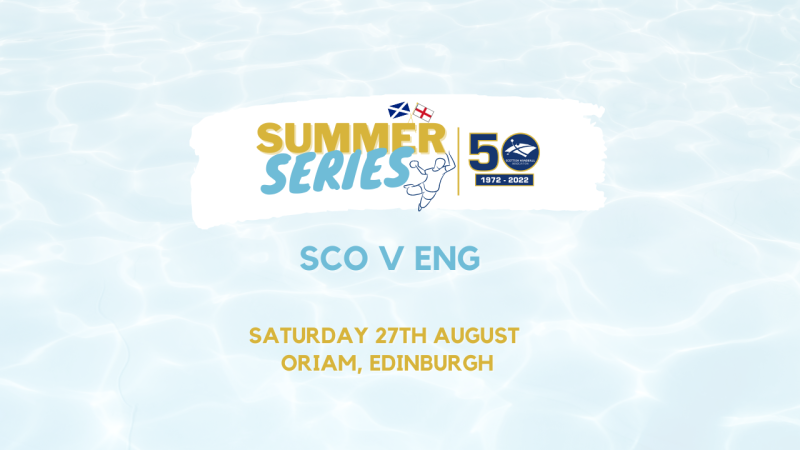 To celebrate 50 years of the Scottish Handball Associaiton on Saturday 27th of August at Oriam our 06/07s, 04/05s and Senior Scottish National Teams faced some tough opposition in a day filled with ancient rivalry. It was a day full of celebration and pride as we hosted six matches against England in the captial as part of our Summer Series.

Early doors for the 06/07 girls in the first match of the day. The U16s debuted some fine skill with Captain Freya Murty leading the charge as top goalscorer in the match. The two teams played fantatsically well, with England winning with a convincing scoreline of 12-23. Despite the scoreline, this was a fantastic display of handball shown by our young team, with many scoring their first international goals.

Next up was the 06/07 boys match. The game was incredibly tight throughout, equalisers at every first or second goal. The atmosphere was electric as we approached the final buzzer. Was Scotland going to take the win or would England come out triumphant? It would only take one goal to decide the outcome of the game. At the final buzzer the score was 25-25. A reflective score of the game!

This was the debut match for the brand new Scottish Handball Women's National Team. Head Coach Antonio Viegas de Sousa had prepared his team for a tough match against a more experienced English side. The 16-strong Scottish Team maintained a steady playing pace throughout the game with Lucile Govan and Sarah Clelland both scoring a number of fantastic goals. Unfortunately as the game came to a close, Scotland didn't quite have enough to keep up with the strong attacking English side, with the full time score ending 23-34. Despite this, Scotland showed some truely impressive skill, no doubt will have inspired many in the packed Oriam stands to one day play for their country.

The 04/05 girls were up next. The older girls' National Academy team also faced tough opponents. The English side came out strong with the half-time score sitting at 6-12 England. The girls played well with a good tempo when attacking, with top goal scorers including Captain Christie McDonald, and seasoned GB U17 player Freya Murty. The Scottish girls continued with their strong attacking tempo right up to the final buzzer with the final scoreline at 18-23.

The final of the National Academy matches were the 04/05 Boys. Having watched many of the previous matches the boys knew what to expect from the English side. Therefore, Scotland started strong, and attacked just as spectacularly as they defended. The boys defended as a unit and shut down a large proportion of English attacks. There were goals across the board for the Scottish boys as only three out of fourteen players didn't get their name on the scoresheet. It was a magnificant display of handball with the final score 27-17 Scotland.

On the back of the Boys 04/05s victory the debuting Scotland Men's team were determined to keep up the winning streak. The first thirty minutes of the match was incredibly tight. Half time the score stood at 17-15 Scotland. However in the 2nd half, the game became even more intense with a number of two minutes given out to both teams. A strong team performance and a number of spectacular goals gave Scotland a signficant lead in the 2nd half. The game finished a brillaint 38-30 to Scotland!

We can't wait to see our National Teams back in action again soon! Matches can be watched back on our YouTube Channel (we apologise for poor quality of footage).